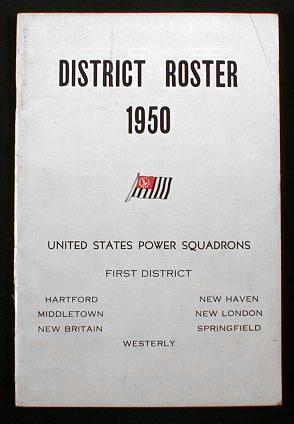 Groton, Connecticut: United States Power Squadrons, 1950. Membership roster for the first district, United States Power Squadrons, including Hartford, New Haven, Middletown, New London, and New Britain, Connecticut; Springfield, Massachusetts; and Westerly, Rhode Island. The declared purpose of the United States Power Squadron is to "establish a high standard of skill in the handling and navigation of yachts, to encourage the study of the science of navigation, to co-operate with the agencies of the United States Government charged with the enforcement of the laws and regulations relating to navigation and to stimulate interest in activities which will tend to the upbuilding of our Navy, Coast Guard and Merchant Marine". Printed wraps, about forty pages (unpaginated). Includes numerous advertisements for marine-related businesses. Some light cover soiling and a bit of edgewear, internally quite clean with no names or other markings. . Soft Cover. Good. 8vo - over 7" - 9" tall.